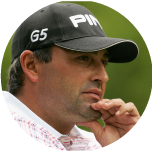 Cabrera is one of the most renowned golfers in Argentinean golf history, and this is due to his charisma and excellent professional performance.

In 2007 he surprised the world by taking one of the four majors: the US Open, and on April 2009 he became the first Latin American to win the Master, in an excited playoff with Kenny Perry deserving the historic tournament and the famous “green jacket”.

Actually, he is the only non-American player to win the US Open and the Masters,
and the only Argentine player in the top ten-world golf ranking

Cabrera started in 1969 as a caddy. His friends, bigger than him, were caddies at the Cordoba Golf Club and they suggested him to join them. “I’ll go and see what is all about,” he told himself. He was ten years old at the time and, after that one exploratory trip, he was hooked.

Caddies have their playing opportunities in Argentina and Cabrera soon emerged as one of the promising young players in the region. When he was 18 years old, he finished sixth in the prestigious Center Open in Cordoba, so he knew he wanted to make this game his career.

After some years of playing with scarce resources and with the help of some club members, he played in and out of the country with good results.

In 1990, Angel obtained the European Tour card. In 2001, he won his first title when the Argentine Open was part of the Old Continent tour.

He joined the PGA European Tour in 1996.

– Only player from Argentina in the history of Argentinean golf to be Top Ten in the official World Golf Ranking.

– Shared with Ricardo Gonzalez (Foursomes) a record 61 at the 2005 WGC-Algarve World Cup in Portugal at Victoria Club de Golf, Vilamoura.

– Finished second behind Tiger Woods and David Duval in the WGC World Cup playing together with Eduardo Romero.